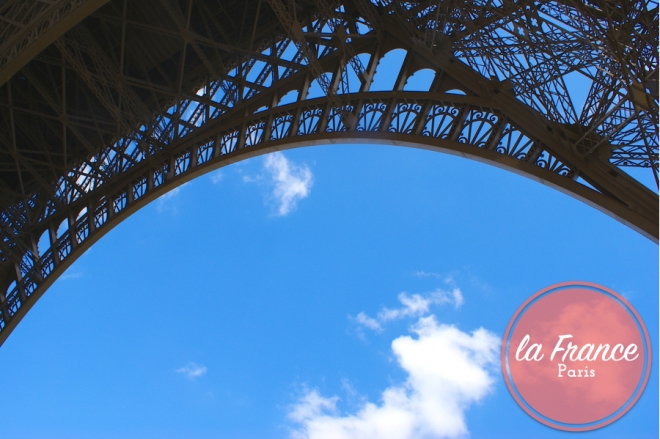 well, after a totally insane Friday (i got everything done, y’all!) and 8 hours on a plane “sleeping” like a contortionist (though apparently was so out by the time i served breakfast, i totally missed the whole thing), we made it! all i can say is that the first leg of our 10 days in France was amazing. 48 hours was a complete whirlwind of just trying to get through the basic must-sees in Paris. i absolutely wish i’d had longer and may need to come back for an extended stay sans child. ahem. though Miss Girl did absolutely great for the most part with all the grown up stuff, truly, truly.  the people were lovely . . . no, really lovely. and the weather turned gorgeous after a chilly, grey start. we felt pretty lucky we didn’t just get rained on the whole time! there’s far too much to tell, so i’m hoping these pictures can capture the heart of our experience (it’s still a long ‘un, kids). you can roll over images for captions and click to move through whole galleries. savourez! à la prochaine . . . (sooner, i swear!) 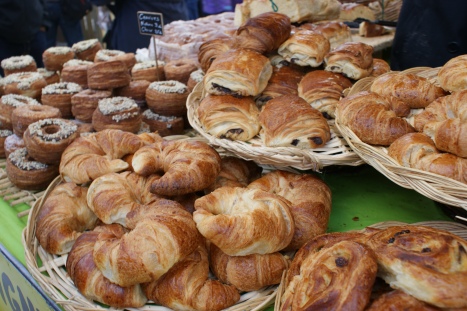 pastries at a street market along the Seine near the Eiffel Tower. the pain au chocolat was amazing.

Seine near the Eiffel Tower looked chewey and gorgeous.

recommended in a book of kid-friendly places to go in Paris, this cafe was uncrowded and pretty basic, yet served up a delicious array of French classics. there, we finally found something Miss Girl’s go-to French food: Croque Monsieur. 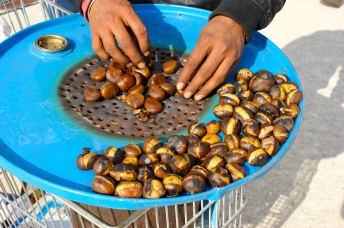 with a chill still in the air, the guys roasting chestnuts on the street were everywhere slow cooking these savory treats. 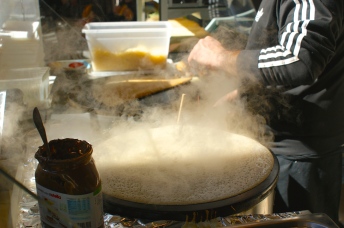 we couldn’t come to Paris and not have this staple. late Sunday lunch on a stroll by the Louvre was as fun to watch as to eat. 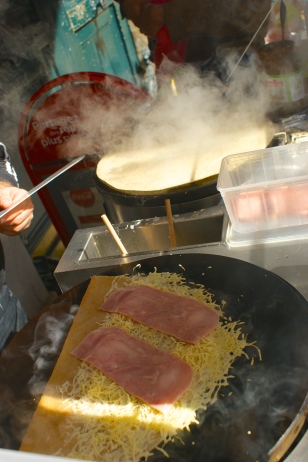 we told Miss Girl it’s kind of like a ham and cheese quesadilla. pretty sure the French would die if they overheard that one. 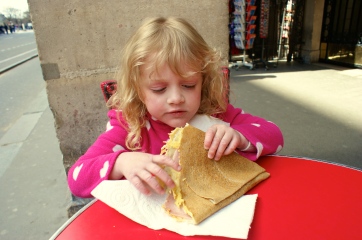 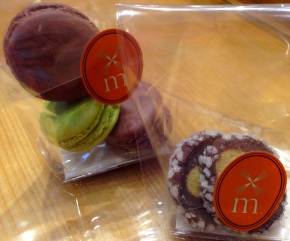 i thought finding a patisserie with something beautiful and yummy for Miss Girl’s birthday would be a piece of cake (ha). not so much. these macarons were the first attempt. she hated them. i’m in love. 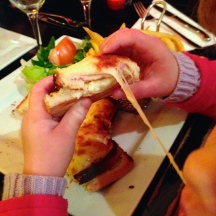 i really wanted to see the Latin Quarter, so we headed over for dinner on Sunday night. after several tries, we finally found a cafe with a Croque Monsieur for Miss Girl. mmm . . . cheesy! 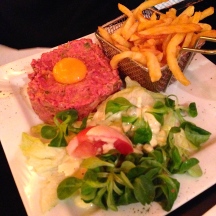 that same dinner, Spy went classic with a steak tartare. i didn’t partake, but it looked delish. 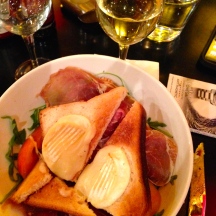 i went lighter (?) with a salad topped with proscuitto and goat cheese toast. again with the yummy (cheap!) Chardonnay. mmm . . .

Miss Girl finally got her birthday treat: a fudgy, brownie-like chocolate cake drizzled in chocolate syrup and swimming in creme Anglaise. the stakes are high for 6. 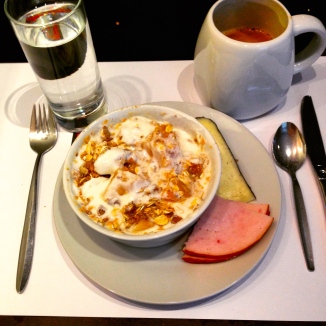 so basic, but really awesome 2 days in a row at the hotel: fresh yogurt with peaches and muesli, with a side of ham and ewe’s cheese.
of course everyone raves about the food in Paris. with a 5-year old in tow, we didn’t have the opportunity to get too fancy or even to while away an afternoon at a café sipping wine and lingering over moules-frites. however, we did have a few awesome quick and low-key culinary encounters that i think did justice to, let’s say casual French dining, with a mix of bistro fare and street food. one thing’s for sure: this was not a low-carb event. 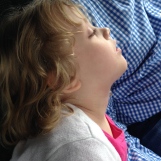 i somehow accidentally erased the first nap photo of her sleeping from home to ATL to kick things off. no worries. it looks exactly like this one. 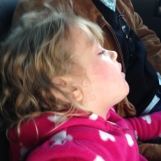 birthdays are hard. a pre-dinner disco nap was def in order to keep the party rolling. 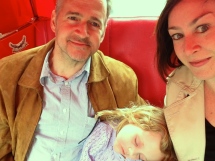 yes, really. who does this? traffic noise and bumps in the road, be damned.
fact: Paris makes my family sleepy. not sure if it’s something in the air or the sheer state of being actually on vacation and relaxing, but we have never slept more as a family than we did that 2 days! after a nap to get caught up from the sleep we missed on the flight, we also had absolutely no problem adapting to a European lifestyle of eating dinner around 8:00 or 9:00 and then falling asleep easily around 11:00. that’s honestly not too much later than our regular schedule of bedtime. but, while we’re used to pretty regular 7:30 weekend wake-ups at home, here we slept until 10:00 both mornings. all of us. it was heaven and i never wanted it to end. in addition, a certain somebody picked up a habit of sleeping in cabs. no fail. every single one we got in, she dozed off. it was pretty amazing.

French rooftops! classic view and happy to have hotel windows that actually open! 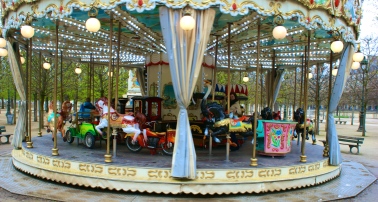 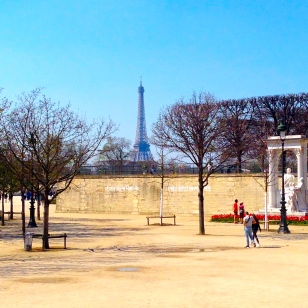 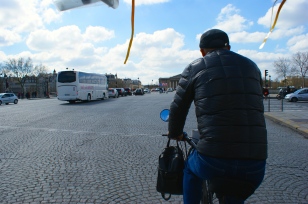 seriously the best way to get across town vite. this dude hauled. 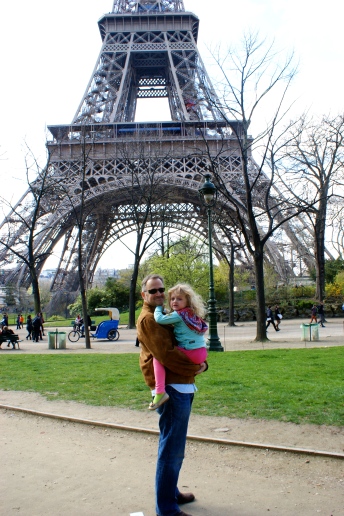 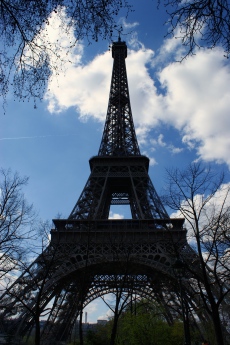 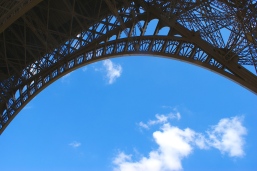 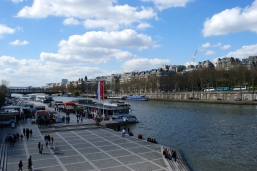 omg, y’all. it was so cold and windy that day, it was all we could do to hang out a bit and not freeze.

cold as she was, someone still had a little jambon in her! 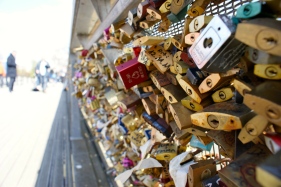 so happy i made it to this random bucket-list destination! quite accidentally! so fun to see all the tributes to l’amour.

yay! it’s so much bigger than the one in Atlanta!!

we spent a good bit of time outside the Louvre. so much more vast than i expected and with the crowds, going in was totally not an option. and i’m totally okay with that. (judge me. go on.) 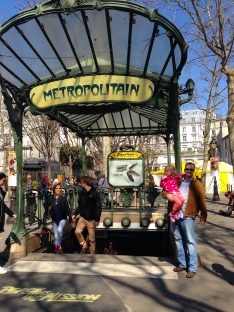 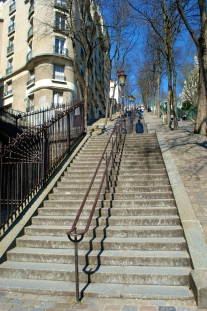 these stairs remind me so much of the Georgetown stairs featured in The Exorcist. that’s all. 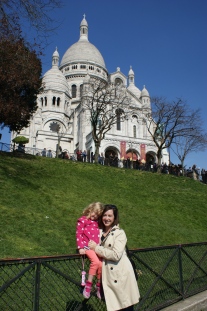 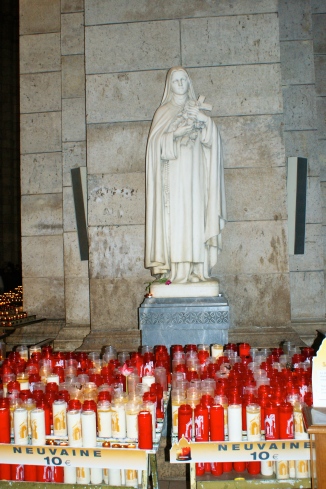 i totally don’t get organized religion. there it is. i was simultaneously awed by the architecture and sheer mass of the cathedral, as well as the people actually coming to pray, light candles and find meaning. 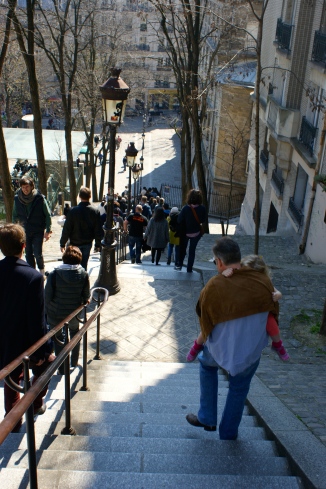 getting down can be hard.
alright. so like i said, 48 hours in Paris was so fast. we did some basics. had some great weather and feel lucky Miss Girl let us get through as much as we did. i did quick hits on pretty much my whole list and feel satisfied. next time, i’ll actually go into the Louvre and Musée D’Orsay. will stroll a little bit more leisurely and book an afternoon of lounging at a café and generally do a more expat writers tour of the city. with time, of course. what i won’t ever do is shop. sorry, i have no desire to buy shit i can’t afford in Atlanta somewhere where i’m not at least paying American taxes on it. Hermès, Vuitton, Chanel . . . i’ll see y’all at Phipps.

repeat.
so that was the schtick for the 2 days. sleep late. breakfast at the hotel. roam around. swim/work out. roam around more. fall in bed around 11:00. get up and do it all again. i could totally get used to this! unfortunately, there was more vacation to enjoy . . .