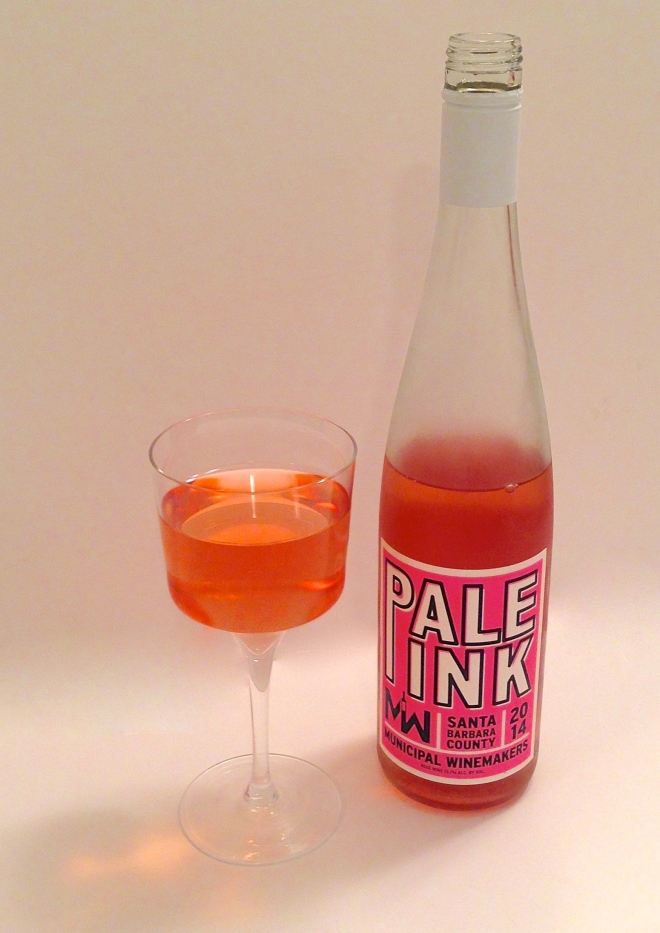 in the past couple weeks, i got an email asking if i would be willing to sell one of my domains. it was one that had a brief (though private) life as my blog before peaches & poppycock. but in the end, because it was tied to a name i don’t use professionally, it seemed complicated — and kind of too personal — and i parked it so i could explore going by this moniker in the blog world, instead.

i’ve never been approached for anything like this before, so i was entirely unsure how to respond to the seemingly straightforward note from a woman who said she’d owned the domain before me and was now ready to do something with it. she’d said she had recently moved from New York to California with her family and was trying to create a simpler life. i could totally totally vibe with her on that sentiment. given those circumstances, she couldn’t pay me a lot, but wanted to see if i was willing to sell and see what we could work out.

i was interested to see where this would go, so i wrote a brief note back saying i was interested, but not giving up too much information. i mean, this chick could be the next Zuckerberg with piles of VC cash behind her and i’d feel like an idiot if i gave it away for free. i wasn’t gonna just spill that GoDaddy had only appraised me at somewhere between $71 and $283. how much did she really want it? i made her start the negotiations. y’all know i’m tough like that.

well she came in at “how about a box of wine and local goodies from Santa Barbara?” cunning little minx. she’d obviously read my blog and knew i’m a sucker for wine. old hard-bargain Woodward here had just one response to that little suggestion: SOLD!

and just like that, i had an interesting little story to tell, a new acquaintance in the blogosphere and tracking numbers for 2 packages that would arrive shortly from the west coast. i also had kind of a sense of amazement that people actually did things like this anymore and no one screwed anyone over, plus warm fuzzies for helping someone get something they really wanted when having it didn’t mean a thing to me. last Friday morning when i clicked the button to confirm the transfer of emmasphere.com, i felt like a really nice thing was happening in my tiny little part of the universe. i’m not exactly sure what Emma is going to do with the site, but i definitely plan on checking in from time to time. 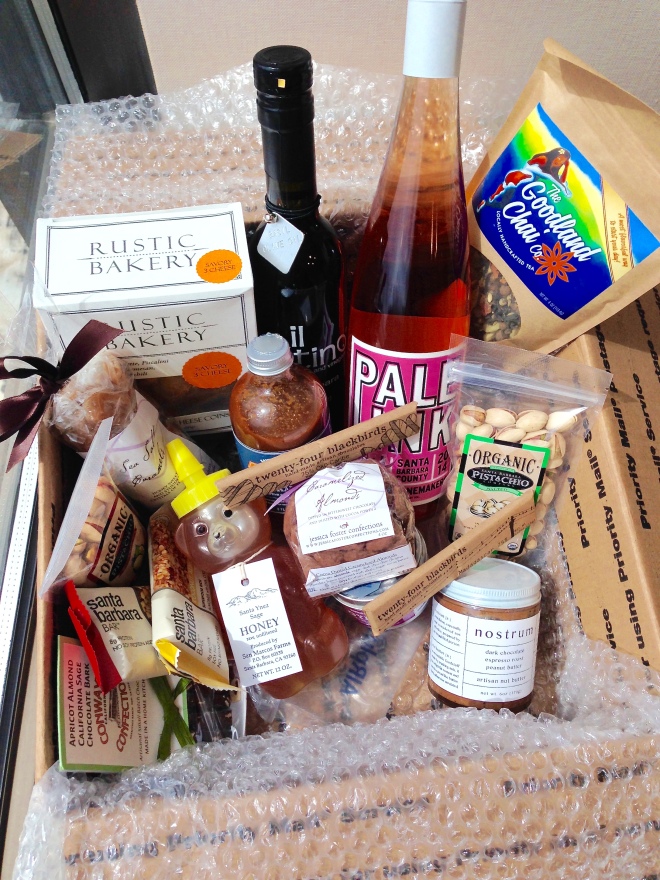 Emma couldn’t have been more generous and thoughtful with her selections. the first box arrived on Monday and i have to admit, i shared most of the goodies with my officemates after snapping the photo! but i sampled generously and have all the less snacky things to try out still. a really great collection of stuff — Santa Barbara is lucky to have so many amazing creators of deliciousness! the second box (all wine, y’all!) arrived today, so i have had no chance to do anything but photograph and write. i see several more wine Wednesday posts stemming from this in my future!

while writing this, i cracked open the gorgeous rosé (omg, how did she know i love a rosé?!) from the original box and promise to write more about the others later. this one is really dry with hints of berry. it weirdly has an effervescence that i love, though it it isn’t actually sparkling. subtle in pretty much everything. i love it.

here (in no particular order) is the rundown of everything:

il fustino — olive oil (stacked in my stash. obvs it will be lovely!)

The Goodland Chai Company —we’re coffee people, but i’m sure someone at the office will try it and rave!

Jessica Foster Confections — Sea Salt Caramels and Caramelized Almonds. i’m not gonna lie. the caramels were not my favorite, but it everything in me not to eat the entire bag of those almonds covered with a sweet, crunchy coating and a dusting of dark cocoa powder.

Nostrum — Dark Chocolate Espresso Peanut Butter (this is probably like crack and i should never open it.)

Santa Barbara Bar — Coconut White Almond and Cranberry White Chocolate (mad that i didn’t grab at least one of these for myself!)

Conway’s Confections — Apricot Almond California Sage Chocolate Bark (these more than make up for missing the other chocolate bars. yum.)

Pacific Pickle Works — Bloody Mary Elixer (seriously. this chick can read me like a cheap magazine. 3 more sleeps ’til Sunday!)

and now, the wine! 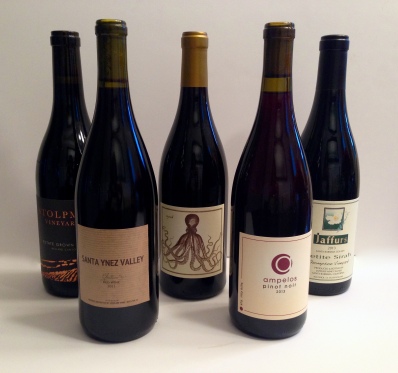 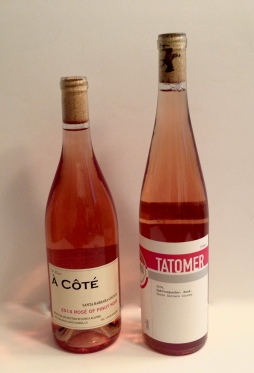 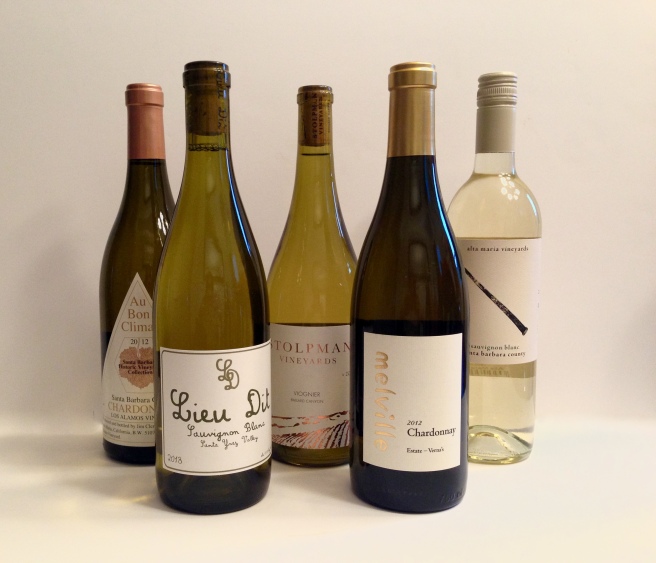 all from The Winehound in Santa Barbara. like i said, any commentary will have to wait, but i mean it’s wine y’all. it’s gotta be a real stinker for me to kick it out of the kitchen. i love that Emma selected a nice assortment of reds, whites and pinks. something for everyone. or everything for me!

would love to hear if any of you know and love any of these exotic California treats!