mmm-kay. so ‘member last night when i said i’d try and post my recipes? (yeah, you do.) well this had the potential to get totally ghetto. y’all almost got iPhone pictures of the ass-old-stained-scribbled-on-now-moldy-because-i-have-no-idea-why pages in my recipe binder. but i decided i was better than that. and these recipes deserve better than that. they are some of my favorites, many of which i’ve been making for 15+ years. so i came downstairs early (i was up worrying about this anyway), brewed some coffee and turned on the Google machine to see what i could find. as best i could pull it together, here’s what will be on my table on Thursday. definitely check out these recipes if you’re looking for some last minute ideas. what are you making for Thanksgiving?

Herbed Squash Soup
the closest recipe i could find was on atkins.com. mine also calls for 1/2 teaspoon of oregano and a cup of sour cream instead of the heavy cream. (photo: simplespoon.com)

Emeril’s Brined Turkey
recreated at TheTribuneNews.com. this one is different from another Emeril recipe because it includes things like oranges, cinnamon sticks, cloves and brandy, which give it a sweet/savory kind of taste. (photo: foodnetwork.com)

Mashed Sweet Potatoes — i usually make a butternut squash dish, but Miss Girl has decided she likes sweet potatoes, so i’m giving in. and i’m totally wingin’ it. seems to me some butter, brown sugar and cinnamon should do the trick. i’ll let y’all know how it goes. 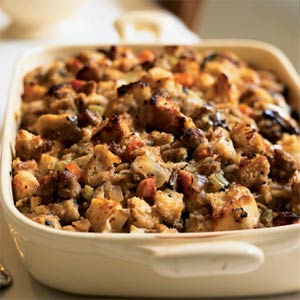 Sourdough, Pear & Sausage Dressing
yes! the original recipe (and photo) from Cooking Light/myrecipes.com. i could eat the entire pan of this stuff. nomnomnom. and here’s a fun little tidbit on the dressing vs. stuffing debate. what do you call it?

Garlic Mashed Potatoes — sorry, but if you need a recipe for mashed potatoes, you’re a moron. i add some garlic sautéed in butter to mine.

Cranberry Sauce with Crystallized Ginger
woo-hoo! another original from Bon Appétit/epicurious.com. i also add a can of Mandarin oranges because over the years, i kind of mishmashed a couple recipes and that just stuck. (photo: damndelicious.net)

that’s right, y’all. i ordered a cake and i ain’t ashamed to admit it. one less thing to worry about and i just know this’ll be good — Piece of Cake always is.