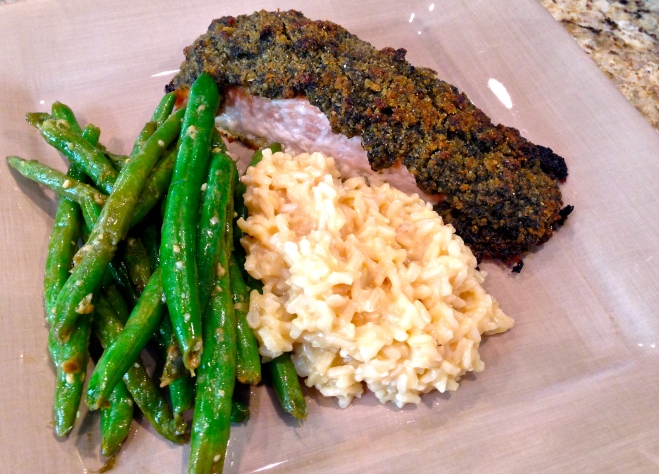 wow. i think this might be the first actual meal i’ve cooked in something like 2 weeks! pasta and doctoring a pizza do not count. i totally loved the break, but getting back into a regular routine has been tough this week with Miss Girl being sick Monday and Tuesday (i totally blame her nose on the armrest during the cab ride home. ugh.). i figured cooking a real Sunday supper was a good way to kick things into gear to start off a new week on the right track!

y’all know how i do, so when i say “cook” you know it’s a very loose term around here. i had a pile of chicken in the freezer, but was itching for seafood and got a good deal on some salmon today. i kind of do the same thing with fish pretty much every single time (Emeril’s Fish Rub + grill pan), so i started perusing the pantry for other options. i’m also kind of in a use all your old shit kind of mood since a lot of stuff got cleared out the week before and of France. anyway, because i buy random stuff all the time with good intentions (and then never follow through), there was a jar of pesto. i thought that might be interesting. turns out, pesto encrusted salmon is actually a thing and i’m not crazy to think it might work.

pesto-crusted salmon
here’s my inspiration recipe for those interested in actually cooking. for those who aren’t, i basically took half my jar of pesto, added about 2 tablespoons of bread crumbs and followed the rest of the directions for prep and cooking. results? OMG freaking delicious, y’all. i mean. really. wow. this might become a regular thing around here. except it’s like 1,000 calories. whatevs. 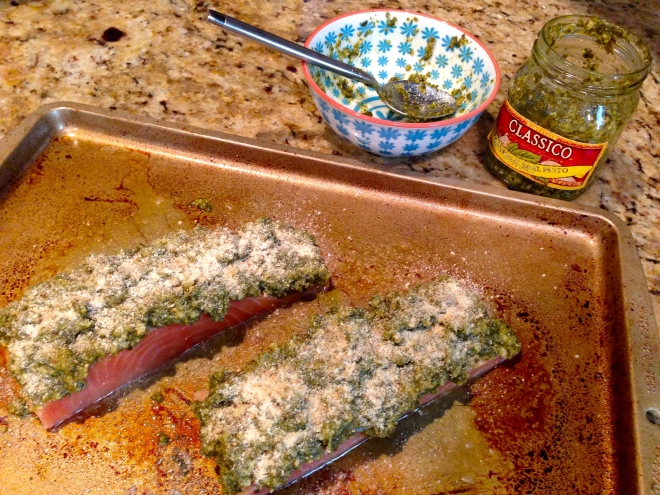 sides
bringing up the sides were another couple of tweaks to what i usually do:

green beans steamed, then quickly sauteed in butter and garlic (it is apparently National Garlic Day, after all), then splashed with lemon juice. 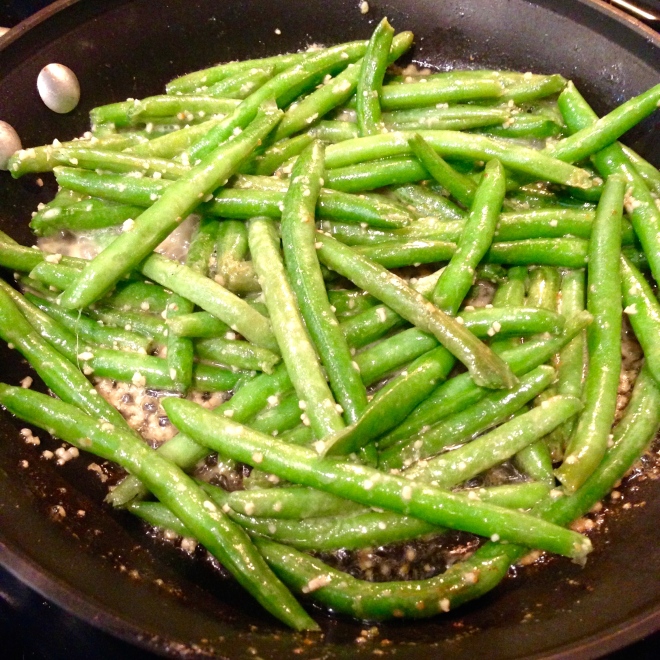 also, fake risotto. ha. i was in the midst of cooking up some brown rice (half water, half chicken broth), when i decided it needed to be more (Spy is not a fan of plain old rice). so just before it was all done, i added half a can of cream of chicken soup (i was out of mushroom, which was the first choice) and about an ounce of shredded Parmesan. it turned out super creamy and delicious. i would just maybe cook the rice in the broth about 10 minutes longer next time to make it softer.

so there you have it, the theme for the night: fake it ’til you have time to make it! good advice for the week ahead — have a great one, everyone!