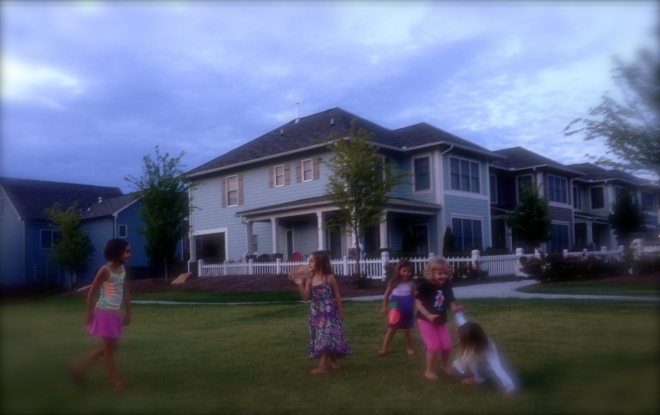 it was Saturday night. all my favorite neighbors in my little suburban-feeling intown neighborhood were gathered to send off a favorite family who is sadly moving away this coming weekend (they’ll be back). our next door neighbors had fired up the grill and put out a great spread. kids were all playing in the park behind our houses — girls on pink scooters, boys playing cornhole and a handful running and shrieking with delight as minnows became sharks against a well-landscaped backdrop. amongst the adults, cocktails and conversation were flowing.

it was a modern Norman Rockwell scene and a pretty perfect evening, as far as i was concerned — one of those that reminds me what great friends we’ve made here and reinforces what a good decision we made in choosing our neighborhood.

and then the sky to the west turned pitch black and began to rumble, angry that anyone should be having such an idyllic evening. mommies scrambled to the park to collect chalk and beanbags and anything that would perish in the downpour that was about to descend. quickly, everyone scattered. and we ended up like this: people without kids and people visiting the neighborhood in our original hosts’ beautifully appointed home to the right. four 3-5 year-old girls in our middle house watching Tangled. parents of those girls and party honorees (who left their children at the grandparents!) on lawn chairs in the garage to the left.

the rain came down in buckets. for seemingly hours. a sleepover for the girls ensued, complete with real air-popped popcorn topped with real butter. and in the garage, a debate about charter-versus-public schools began. and obviously, more wine became necessary.

if you’ve been following my adventures with the box, you know i’m kinda down to the end of it. hadn’t done a new order or much random re-stocking. so all i had left were “the sweet ones.” ugh. really, i have to drink a Riesling and a Gewurtz? and OMG i’m so embarrased this is all i have to bring to the party! even if it is just a lawn chairs in a garage party!

and then . . . oh, hai, The Sisters! y’all must be named Crisp and Dry. not what I’d normally expect of a Riesling. turns out, it is actually a Riesling mixed with Albariño, which (i just learned, thank-you-very-much-Wikipedia) has been thought to be a Riesling clone. so, very, very close. Spy has introduced me to several Alsatian Rieslings that aren’t sweet, so i did know they exist and was nicely surprised to have uncorked uncapped another one.

so, guess what. not only was i not banished from the garage wine party, everyone loved my addition — and asked to be invited over when i opened the other bottle!

another add to my next Naked Wines order!