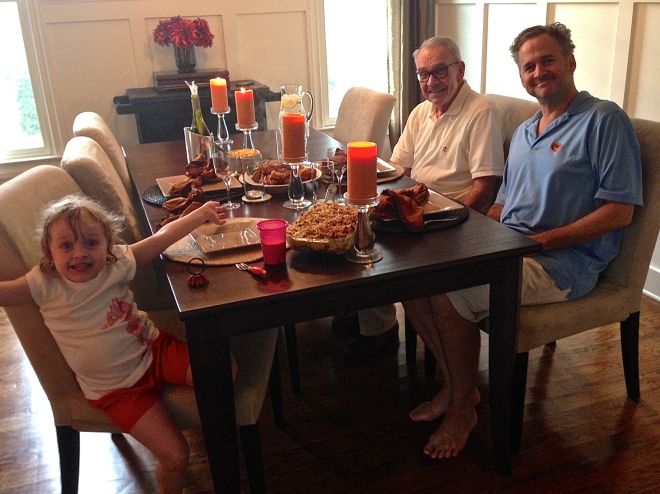 i know i’ve taken a couple weeks off from posting these. and wouldn’t you know, the one time, like ever, that i make actual recipes (yes, from the internets, from scratch) i am too caught up in the whole moment to actually take any pictures. also, i have one heck of a cold all of a sudden. and this is only like the second time in history i have cooked for my father-in-law, so was definitely worried about it all working out. so, really, i can’t be held responsible. and you’ll have to trust that it all looked delish (which it really, really did!)., but you’ll have to enjoy a random family pic instead this time. 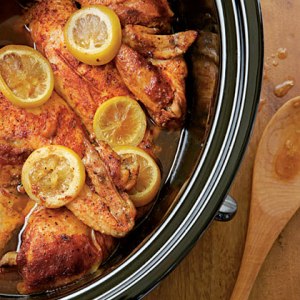 y’all know my recipes well enough by now to know that if i were to do barbecue chicken in the Crock-Pot it would totally consist of boneless breasts, a bottle of store-bought sauce and (because i have a couple wits about me) some chicken broth so i didn’t end up with a caked-up, dried out mess at the end.

that said, i felt like i needed to “really cook” something for this occasion . . . in as much as throwing some ingredients in the Crock-Pot can be called “really cooking” anything. this seemed like a great compromise that would let me get the main part done early so i could relax and enjoy the day, and also not spend 2 hours prior to dinner worrying about what i had to put on when. you’ve cooked a meal for guests. you know how it is. exhausting.

anyhow, this Southern Living recipe is totally simple. i subbed some pieces for a whole chicken, since i couldn’t find one already cut up. i ended up with 2 bone-in breasts, which i halved. 3 legs and 3 boneless thighs (couldn’t find those with bones — so weird). i ended up doubling both the rub and the sauce, but didn’t use quite all of it. just kind of eyeballed what looked like enough (yes, back to my old ways). and because i totally screwed up my timing, i ended up cooking it on low for 6 1/2 hours instead of the shorter time on high.

the end result was amazing. bourbon, Coke, brown sugar and ketchup in the sauce. how on earth could it be bad? a couple of reviews on the site said it was too lemony. those bitches are cray-cray. it was so not even lemon-in-your-Tab lemony. the meat completely fell off the bone and had great flavor. i will say that the breasts ended up a little dry, but with so much yummy sauce to drizzle over them, who the hell cares? 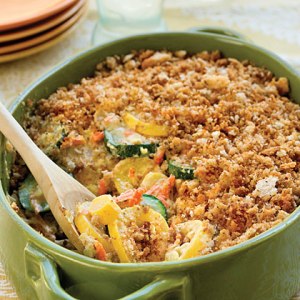 Spy loves the squash and zucchini. usually i just do a simple sautée, but again, felt like i should up the game a bit. also, anything i didn’t have to watch on the stove 30 minutes prior to sit-down was a good thing, i figured.

this recipe was interesting (another one from Southern Living) because instead of having a bunch of cheese in it, it is based on just a lot of vegetables, cream of chicken soup and buttered bread crumbs on top and bottom. again, what’s not to like?

i didn’t change a thing and it came out absolutely amazing. totally the right combination of creamy and crunchy, fresh and savory. seriously, this might even make my Thanksgiving table. 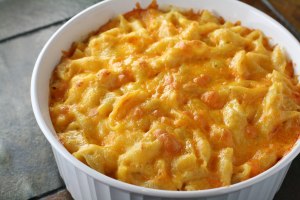 there had to be one cheat, right? i added a little extra shredded cheddar to a couple containers of Publix deli macaroni and cheese and baked it until it was all bubbly and brown. let’s just say no one noticed it wasn’t totally homemade. (photo: foodbabbles.com) 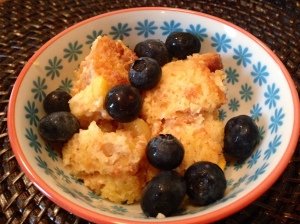 i haven’t yet gotten around to doing a post about the gazillion peaches that came off our peach tree earlier this month and all the things i’ve been doing with them, but this is one of those things. originally a Rachael Ray recipe for Coconut Cornbread Pudding that has a Caribbean flair (code for rum, duh), i thought it might adapt well with a little Southern flair, instead. also, Miss Girl insisted i buy a loaf of sweet cornbread, which she immediately decided she hated upon tasting it. so i wanted to figure out something to do with that other than just tossing it in the trash. i mean, for god’s sake, there are starving children in China who would kill for a loaf of sweet cornbread. anyway, i subbed out the coconut milk with additional evaporated milk, traded the rum for bourbon and replaced the raisins with diced peaches. definitely yummy results, but it needs a little something extra. i threw blueberries on it, since that’s what i had. but ideally, it needs a sauce or even ice cream (maybe peach, when i make that in the next few days?) to add a little extra sweetness and give it a little something gooey.

so, even though i broke the first rule of entertaining and made a bunch of brand new recipes for the first time when i had guests at the table, we ended up with a great meal and a great Fathers Day celebration. so fun to do a little real cooking again and find a few new dishes to add to the rotation.