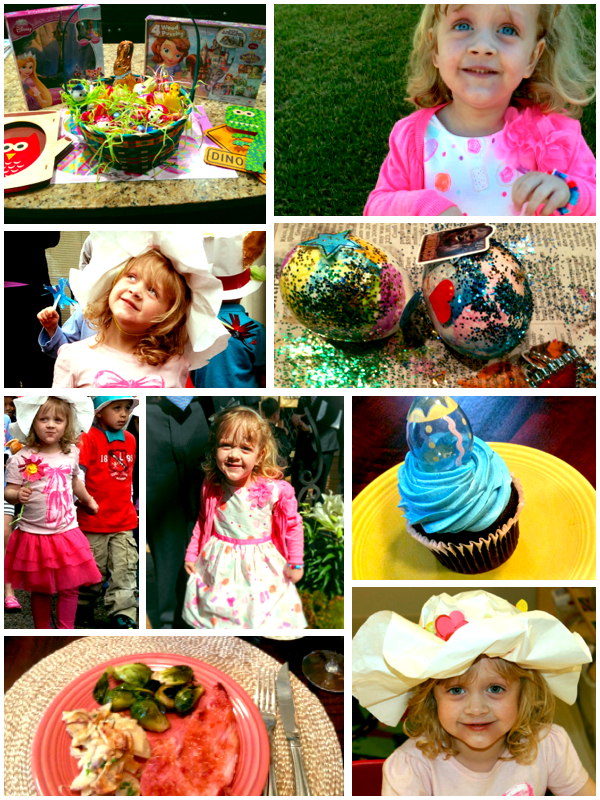 as if there haven’t been enough festivities lately, one more big one before we slide gently into the summer’s long stretch of nothingness. i’m so ready.

the school bonnet parade kicked things off on Thursday. those kids are all so cute and the teachers always do such a fantastic job of coming up with amazingly creative and well-executed hats. i think they must secretly compete to see who can outdo the others! this year, our class was definitely the best.

on Saturday, both soccer and the neighborhood Easter egg hunt were rained out, thank goodness. that bought me a free morning to run some errands, run the cemetery and take care of a few things around the house, including decorating a few Easter eggs with whatever craft fixins i could rustle up. the only people who like glitter more than 4 year old girls are strippers and drag queens. trust and believe i will be suffering their fate for days to come, picking glitter off myself long after sheer logic and the physics of personal hygiene would suggest is possible. after early Easter dinner, followed by some ridiculous cupcakes just to get the sugar flow started, we all nestled snug in our beds while visions of jellybeans danced in our heads . . .

the Easter Bunny really outdid himself this year, thanks to Spy. an inexperienced Target shopper, he filled his buggy with candy on the first overstocked holiday aisle, only to round the corner and realize there was even more! of course, removing anything from his basket never occurred to him as he pulled bag after tantalizing bag off the shelf and added it to the haul. 2 types of Cadbury eggs, 2 types of M&M eggs, 2 bags of jelly beans, too many Peeps to count, Smarties, SweetTarts, some foil-wrapped chocolate eggs for good measure . . . and not 1, but 2 chocolate bunnies. swear to god, we have enough candy to last until the Halloween stash gets collected. then there were the window clings. and the toys. and the wall hangings . . . it may as well have been Christmas. and Miss Girl loved every stitch of it!

next up was church. somehow we actually managed to get to St. Philips early for once and as the congregation was filling the pews around us, she actually asked  “Daddy, when is the show going to start?” oops. guess we probably ought to darken the doors of the cathedral more than twice a year. she lasted 20 minutes into the service before the wiggles became too much for her (and probably everyone around us, as well) to take and we had to get out of there to preserve the sanctity of the occasion. i’m sure Jesus will forgive us.

next, we obviously went to Houston’s for lunch. because that’s what white people do after church. bonus: since we cut out early, we beat the crowd and got seated right away. we finished up in time for me to get in another run (woo-hoo!) before Spy had to leave for his flight.

another holiday and another weekend: check. the only event on the horizon is our 6th wedding anniversary, for which reservations have already been made. and now, i think i’ll sleep for a while.