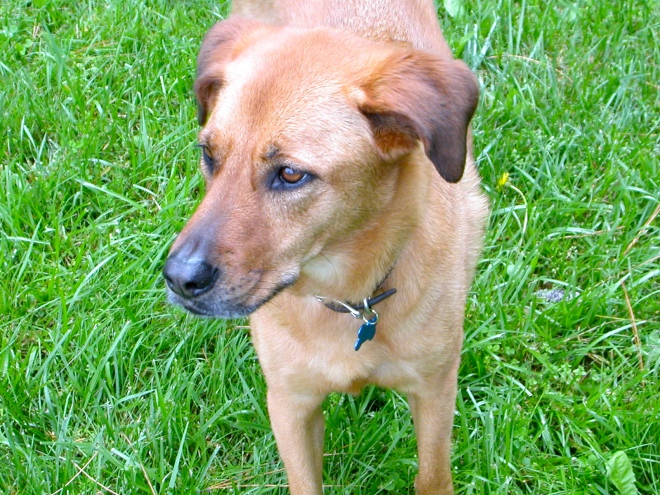 so sad to report that yesterday, we had to put down our beloved Maury, matriarch of our household wild kingdom and the dog i often called second mommy because of how she watched after Miss Girl like her own little pup. she was 15 (that’s 105 to you and me) and her body just finally gave out. yesterday morning she could barely walk. by the time Spy got her to the vet in the afternoon, she could barely stand. there was nothing they could do for her. she got a last supper of canned food before they gave her the shots.

Spy adopted her in New York after breaking things off with fiancée #1. truth be told, he was actually just hoping to get a date with one of the girls who worked at the shelter. he never got the date, but ended up with a best friend who traveled down the East Coast with him, stopping in DC, Richmond and finally, Atlanta. Maury saw lots of things and met lots of girls along the way.

when Spy and I met 13 years ago in Richmond, Maury took an immediate liking to me. i found her consistent post, uh, relations ritual of jumping on the bed and licking me incessantly odd, but loveable. and Spy to this day swears she never did that with anyone else. we had a lot of on and off periods during those early years, and whenever we were drawn back together after an off time, Maury fell right back into her old habits and made sure to show her daddy how extra happy she was to see her mommy again. i credit her enthusiasm for keeping us together as one of the factors in our storybook ending.

Miss Girl hasn’t yet asked where’s Maury? but i expect to have to deal with that question any moment now, and am completely unprepared. it’s clear, though, that Clara and Parker miss their third muskateer. i’m amazed that even with all the other normal chaos still going on in the house, with one fewer family member around, it almost feels quiet.

everything happened so suddenly yesterday, i was left feeling like i didn’t get to say goodbye and give her one last hug. what’s worse is that i feel like most of my interaction with her over the past several weeks (or longer) involved shooing her out of the kitchen, hurrying her off the sofa to go out, begging her to stop licking me and keeping her and Miss Girl separated so that no one accidentally got hurt. thank god i at least treated her to some of my fried chicken skin on Saturday, but have definitely learned my lesson about slowing down and making sure those i love know they are appreciated every single day.

i know there will be more tears in the coming days and weeks as Maury’s absence settles over the household and we are reminded of the quotidian ways she made us all smile. i hope we never forget those little moments and i hope she finds someone wonderful to lick in heaven.