you just called my friend fat. 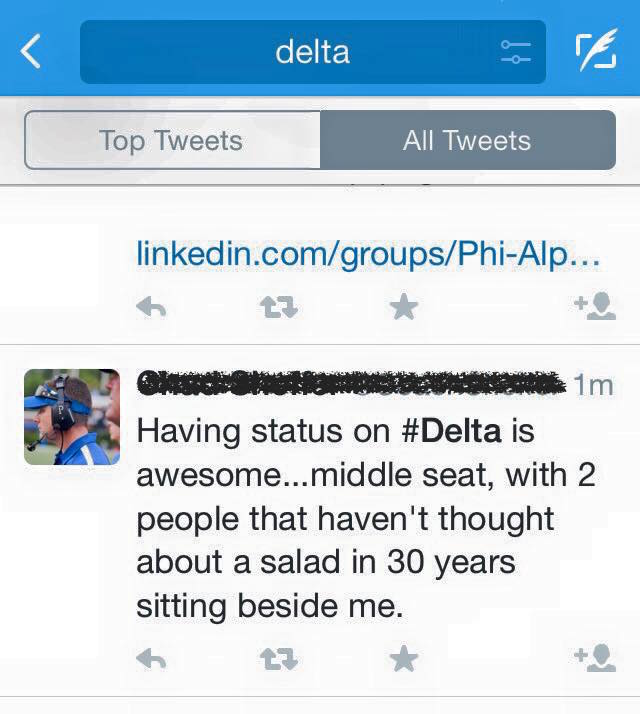 file this one under nonsense, y’all. a weird thing happened in my social media world a couple weeks ago and i’ve been sitting on this a while figuring out what i wanted to say and how to say it. because it was so freaking stupid on so many levels. so here goes.

a friend of mine posted this Twitter screenshot on Facebook. yep. she was one of those 2 people in that row on that Delta flight that basically got called fat. she actually saw the guy next to her tweet this. and of course was appalled. like me, Ms. L is the mom of a 5 year old. like me she worked her ass off last year to, well literally, work her ass off. she’s like a size 6. she looks fantastic. she eats salad like a boss.

so, not only was this judgement from a stranger hurtful and confusing, it was just a downright lie. for attention from this dude’s like 86 followers. super-lame. well it got attention, alright. Ms. L has some amazingly loyal friends who always have her back. they also have Twitter accounts and weren’t afraid to start giving this guy shit. he was man enough to post something negative about someone he doesn’t even know, but not man enough to ever respond to criticism about it. super-lame. the conversation escalated a bit on Facebook, too, with mostly support, but also a comment or 2 saying to give the guy a break, he was obviously joking.

even though this dude proceeded to spend the flight hogging arm rests and generally manspreading, totally uninhibited by the 135-pound women on either side of him, i’m not writing this post to call him out. obviously, or i wouldn’t have hidden his name. but the chain of events really got me thinking — about the role of social media in our lives, given the multi-channel life this thing took on, but also about why men think it’s okay make these kind of judgements about women. ever. even joking. and yeah, i’m calling it out as a man thing because what specifically irritates me is men talking about women’s bodies like they’re not attached to real people. and it happens all the time whether they are degrading or complimenting. if he’d been flanked by 2 bros with beer bellies, would he have said the same thing? or anything? nah. they probably would have ordered a round of Miller Lites and talked baseball the whole flight.

Ms. L is totally grounded and pretty much unfazed by all this. i love her. but there are a lot of women who aren’t (including me). body issues and eating disorders are so rampant in our culture. and i believe judgmental episodes even as small as this one just feed all the impossible standards set for and by us. so, in no particular order, i just wanted to put down a few reasons why this whole thing was just not okay. even if the guy was just joking. here goes . . .

there are so many more nuances to all this, but it just frustrated the hell out of me. and i’m proud of my girl for not dumping a bloody Mary on this dude’s lap. am i overreacting?